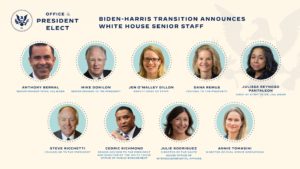 Anthony Bernal, Senior Advisor to Dr. Jill Biden
Bernal served as the Deputy Campaign Manager and Chief of Staff to Dr. Jill Biden on the Biden campaign. Bernal previously served in several roles in the Office of the Vice President, including Chief of Staff, Deputy Chief of Staff, and Director of Scheduling to Dr. Biden. On the 2008 Obama-Biden campaign, Bernal served as Director of Scheduling for Dr. Biden. Bernal has held positions at the ALS Therapy Development Foundation, Coca Cola, and as Director of Financial Administration for the Democratic National Convention Committee. He also served both President Bill Clinton and Vice President Al Gore in their offices of scheduling and advance at the White House.

Mike Donilon, Senior Advisor to the President
Donilon served as chief strategist to the Biden campaign and has advised President-elect Biden since 1981. Donilon previously served as Counselor to then-Vice President Biden and was a Partner at AKPD Message and Media. Donilon has played key roles in the presidential campaigns of every Democratic nominee since President Bill Clinton. Donilon has also advised the campaigns of Senator Bill Nelson (D-FL), Senator Jack Reed (D-RI), Senator Sheldon Whitehouse (D-RI), Senator and Governor Mark Dayton (D-MN), and Senator and Governor Jon Corzine (D-NJ).

Jen O’Malley Dillon, Deputy Chief of Staff
O’Malley Dillon, Campaign Manager for the Biden campaign, is the first woman to manage a winning Democratic presidential campaign. She was the campaign manager of Beto O’Rourke’s 2020 presidential primary campaign and served on both of Barack Obama’s presidential campaigns (battleground states director in 2008 and deputy campaign manager in 2012). O’Malley Dillon was previously executive director of the Democratic National Committee and founding partner of the Democratic consulting firm Precision Strategies. O’Malley Dillon worked in New Hampshire on then-Vice President Al Gore’s 2000 campaign, in Iowa on then-Sen. John Edwards’ second place finish in 2004, and as Edwards’ state director in 2008.

Dana Remus, Counsel to the President
Remus served as General Counsel of the Biden campaign. She was previously the general counsel of the Obama Foundation and the Office of Barack and Michelle Obama. She was the senior ethics counsel at the White House during the Obama administration. She is a Professor of Law at the University of Carolina School of Law and previously taught at the University of New Hampshire School of Law and Drexel University’s Earle Mack School of Law. Remus clerked for U.S. Supreme Court Associate Justice Samuel A. Alito, Jr. and Judge Anthony J. Scirica of the U.S. Court of Appeals for the Third Circuit. She was an associate at Cravath, Swaine & Moore LLP.

Julissa Reynoso Pantaleon, Chief of Staff to Dr. Jill Biden
Reynoso is a partner at the law firm Winston Strawn, focusing on international arbitration and anti-trust law. She is a former U.S. Ambassador to Uruguay and Deputy Assistant Secretary of State for Central America and the Caribbean. Reynoso and Dr. Biden authored an op-ed in the Washington Post this past summer about the plight of asylum seekers at the U.S. border titled, “E Pluribus Unum is on the ballot this November”.

Steve Richetti, Counselor to the President
Ricchetti was co-Chairman of Joe Biden’s presidential campaign and Managing Director of the University of Pennsylvania’s Penn Biden Center. He served as then-Vice President Biden’s Chief of Staff from 2013 to 2017 and White House Deputy Chief of Staff for Operations under President Bill Clinton. Richetti co-founded the lobbying firm Richetti Inc. and worked as a lobbyist for the health care industry. He later sold his stake in the firm. Richetti was formerly the executive director of the Democratic Senatorial Campaign Committee.

Cedric Richmond, Senior Advisor to the President and Director of the White House Office of Public Engagement
Representative Richmond has served Louisiana’s Second Congressional District since 2011. He was the co-Chairman of Joe Biden’s presidential campaign and is a co-chair of the Biden-Harris Transition Team. Rep. Richmond is a member of the New Democrat Coalition and serves as the House Democratic Assistant to Majority Whip Jim Clyburn. Rep. Richmond served as Chairman of the Congressional Black Caucus from 2017 to 2019. Rep. Richmond was born and raised in New Orleans. After graduating from Tulane law school, Rep. Richmond was elected to the Louisiana House of Representatives.

Julie Chavez Rodriguez, Director of the White House Office of Intergovernmental Affairs
Rodriguez was Deputy Campaign Manager on the Biden campaign. Rodriguez served in the Obama Administration for the Secretary of the Interior and later in the White House Office of Public Engagement. She was appointed state director for Senator Kamala Harris in 2016 and served on Kamala Harris’s 2020 presidential campaign from 2017 to 2019. Rodriguez grew up in California in a well-known family of American labor and civil rights activists – she is the granddaughter of American labor leader Cesar Chavez and American labor activist Helen Fabela Chávez.

Annie Tomasini, Director of Oval Office Operations
Tomasini was candidate Biden’s Traveling Chief of Staff. She was previously at Harvard University as Senior Director of State, Local, and Community Relations and Strategic Outreach. Tomasini served in the Obama Administration as Deputy Press Secretary for then-Vice President Biden and previously for then-Senator Biden when he was Chairman of the Senate Foreign Relations Committee. She started her career at Rasky Baerlin Strategic Communications.

These positions do not require Senate confirmation.