After projections that he won the hard-fought battleground states of Pennsylvania and Nevada, former Vice President Biden declared victory in the 2020 presidential election and has already begun the transition process. According to the Associated Press, Biden’s electoral college vote count currently stands at 290-214 over President Trump, although the final results have not yet been certified.

President Donald Trump has not conceded, and his legal team is still filing lawsuits and calling for recounts in a handful of states to ensure every legal vote is counted and certified. Any disputes at the state level must be resolved by the safe harbor deadline of December 8th. The electoral college will then meet on December 14th to officially cast their ballots. Federal law requires states to deliver certified electoral college results to the Senate by the 4th Wednesday in December, which this year is December 23rd. On January 6th, the 117th Congress will meet in a Joint Session to announce the electoral college vote results. If a majority of the electors cast their votes for Joe Biden and Congress accepts those results, Joe Biden will be declared the official winner of the 2020 election and sworn in as the 46th President of the United States on January 20, 2021, Inauguration Day.

After losing 2 incumbents in the states of Arizona and Colorado and picking up a seat in the state of Alabama, Senate Republicans currently stand at 50 Senate seats and Democrats at 48 seats, with 2 seats in Georgia undecided pending runoffs scheduled for January 5, 2021.

The House will remain in Democratic control but with a much slimmer margin. According to the Cook Political Report, as of November 15th the Democrats have secured 221 seats and the Republicans 207. There are 7 seats outstanding, most of which are leaning toward the Republican candidates.

The election results reinforced the fact that the nation’s electorate is deeply divided. Even with a Democrat in the White House, a smaller Democratic Majority in the House and a very slim Majority in the Senate for either party, governing will be challenging. The Democrats are largely divided between party centrists and the more progressive wing and Republicans face internal policy disagreements of their own. Changes are likely to be more incremental than sweeping over the next two years.

All eyes are on the state of Georgia, where the fate of the two January 5th runoff races will determine which party controls the Senate. With the outcome of the Georgia Senate races still undetermined and the control of the Senate unknown, we do not know whether we will be looking at a divided Congress or a narrowly controlled Democratic Congress. If Democrats control both the House and the Senate, they will be doing so with slim margins that will present huge challenges to Democratic leaders should they try to move sweeping pieces of legislation. Expect Senate Majority Leader Mitch McConnell (R-KY) to be almost singularly focused on exercising his current power and protecting his GOP majority in the next Congress, where the 2022 Senate map is challenging for Republicans. Similar to the 2020 elections, several battleground states swill be up for grabs including Georgia (Loeffler seat), Florida (Rubio), Alaska (Murkowski), Missouri (Blunt), North Carolina (open), Ohio (Portman), and Wisconsin (Johnson). Potential retirees include Senators Grassley, Moran, and Shelby.

A Biden presidency coupled with a Republican-controlled Senate would have an enormous impact on the Democratic Party’s agenda. Cabinet and other Executive Branch nominations, judicial nominees, and legislation will face GOP headwinds and require bipartisanship to succeed. Efforts by Democrats to pass major legislation through reconciliation (including rolling back much of the Trump Administration’s signature tax bill), a public option, Medicare for All, addressing climate change, changing the number of justices on the Supreme Court, granting D.C. and Puerto Rico statehood, and changing the filibuster rules would not be possible under this scenario. 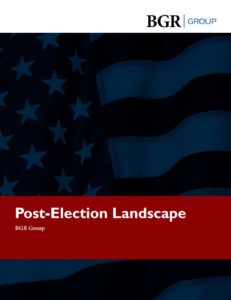