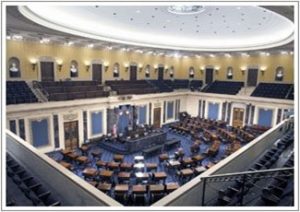 One week after Senate Majority Leader Chuck Schumer (D-NY) and Senator Joe Manchin (D-WV) announced a deal on a reconciliation package dubbed the “Inflation Reduction Act”, the legislation remains with the Senate Parliamentarian for the thorough budgetary review known as the “Byrd bath.” There is broad consensus that the package will ultimately advance on a party line vote. However, a few sticking points remain. What’s more, the process is definitely taking longer than Senate Democratic Leaders would like. Here are five factors to watch as the process moves forward, slowly.

OUT WITH THE BYRD BATH WATER?

As the Byrd bath proceeds, Democratic and Republican staff each make their case to the Parliamentarian for why a provision should remain or be removed from the package based on its impact on the federal budget. When the Parliamentarian makes her official ruling, some portions of the package may need to be removed or changed. As an example, a credit for electronic vehicles (EVs) may need to be dropped or revised. The effort to cap insulin costs may also need to come out given its cost. Any changes to the package could further delay its consideration and, potentially, upset the delicate balance of votes needed to advance it.

Senator Kyrsten Sinema (D-AZ) remains a wild card as she has not publicly shared her position on the “Inflation Reduction Act.” She has said she will not announce her position until the Parliamentarian completes her review of the legislation. According to media reports, Senator Sinema was not consulted on the contents of the package before it was revealed last week, though she has been actively involved in the development of much of the package during previous iterations of reconciliation and has indicated her support in the past for most of what constitutes the latest bill. She is, however, seeking changes to some aspects of the package in order to secure her vote. Senator Sinema is reportedly seeking $5 billion in drought resiliency funding, wants the elimination of the carried interest tax break dropped from the bill, and reportedly would like companies subject to the book minimum tax to be able to depreciate some assets. As negotiations continue, Sinema remains tight-lipped on what her ultimate position will be.

Will Senate Budget Committee Chairman Bernie Sanders (I-VT) vote against the “Inflation Reduction Act”? Probably not. Is he happy with the scope of the package? Definitely not. In a floor speech this week, Chairman Sanders lamented the omission of multiple social programs in the package, including universal pre-K, home healthcare, and the expansion of Medicaid. Sanders said he will want to offer amendments to the package, but Majority Leader Schumer will surely try to restrict Democratic efforts to change the bill when it finally hits the Senator floor. Sanders’ skepticism also begs the question of how House progressives feel about the legislation. Given its limited scale compared to the original Build Back Better package, will it be enough to get their votes?

Once the “Inflation Reduction Act” gets through the Byrd Bath and motion to proceed vote, general debate and the vote-a-rama will begin. A vote-a-rama occurs when the Senate takes votes on amendments to a piece of legislation more than 15 times in one day. Previous vote-a-ramas have lasted for several hours and required round-the-clock attendance from all senators. In the case of a reconciliation package, a vote-a-rama involves amendment votes that may ultimately fail but serve as a tool for the minority to force tough votes for majority members. Look for Republican senators to force difficult votes on issues ranging from taxes to energy during the vote-a-rama. Even if they cannot defeat the package, they will seek to make its passage as politically difficult as possible.

FULL ATTENDANCE IS MANDATORY YET ELUSIVE

For most of the past five months, Senate Democrats have been short at least one senator during the weeks that the Senate has been in session. This summer has been particularly difficult; Senate Democrats haven’t had a single week with full attendance since June. Most of the absences have been due to positive Covid tests, and any absences in August would make passage of reconciliation even more challenging. Unlike the House, the Senate cannot rely on proxy voting (the method of long-distance voting that the House will rely on to pass the Inflation Reduction Act, should the Senate pass it). While it is hard to imagine Senate Democrats not passing reconciliation due to absent senators, as we know, the physical presence of all 50 Senate Democrats will be necessary for passage of arguably their top legislative priority of the 117th Congress. On the flip side, Republicans have had members out too, including Senator John Cornyn (R-TX) this week. Any GOP absences could give Democrats breathing room to move the package forward.