Leading Economic Indicators – Where do they stand?

The economic outlook slightly past the half year mark of 2022 both domestically and globally appears gloomy. The overall stock market is down this year, with major indexes such as the S&P 500 down roughly 18% from an all-time high earlier in 2022. To highlight where the economy stands, the BGR team is providing updates to four key indicators: interest rates, jobs, inflation, and the gross domestic product (GDP).

One of the key actions during the early stages of the pandemic was taken by the Federal Reserve (Fed). When the virus was first seen as an emerging threat in March of 2020, the Fed cut the federal funds rate by 1.5% to match COVID’s effects on American households. Earlier this year, our team provided an update regarding the Fed’s decision to increase the federal funds rate, commonly referred to as interest rates, by 25 basis points at a federal funds rate of 0.25-0.50%. In addition, at the time, Fed Chairman Jerome Powell indicated that the Fed would not be increasing rates above 50 basis points. Fast forward, and the Fed has had to get more aggressive with rate increases. The anticipated end of year range was expected to be around 2.75-3%. Since the last BGR economic update, the Fed has made the decision to increase rates by 50 basis points and then 75 basis points twice. The most recent Fed action was this week, when the Fed raised the rate 75 basis points for the second consecutive meeting. The federal funds rate is now at a range of 2.25-2.5%.

The Federal Open Market Committee, led by Chairman Powell, suggested that “recent indicators of spending and production have softened.” They added that “Nonetheless, job gains have been robust in recent months, and the unemployment rate has remained low.” The Fed’s dual mandate requires the agency to reach maximum employment and pursue price stability. The target rate for maximum employment is around 3.5%, while the targeted goal for price stability requires the Fed to keep inflation low and stable over the long run. 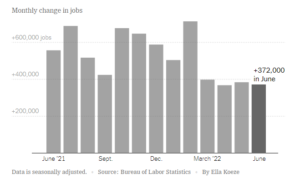 For the past seven months, the unemployment rate has been positive. In December of 2021, the rate was 3.9%, and now the rate has decreased to 3.6%. In the first five months of 2022, the economy has averaged a monthly job growth around 490,000 new jobs. The June numbers reported 372,000 new jobs added. The jobs picture remains a bright spot for the economy and the Biden administration amidst other concerning indicators. 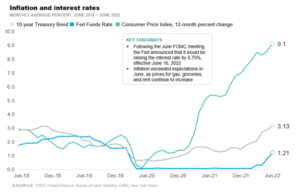 Of particular concern is inflation, which is top of mind for the Federal Reserve and Biden administration as it continues to heavily impact consumers. The consumer price index for June was reported at 9.1%, a 40-year high for the U.S. and a 1.3% increase from the May report. In December 2021, inflation was at 7.1% and has continued ticking up this year. The largest pressure for inflation has been energy indexes followed by shelter and food indexes. The continued inflationary pressures have been the reason for a more aggressive Fed; however, some economists and stakeholders have critiqued the Fed for being too reactionary and not aggressive enough. 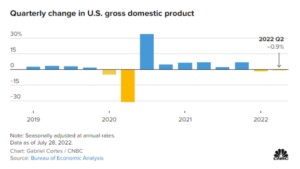 As of this week, the GDP for the first two quarters of 2022 has declined: GDP for Q1 of 2022 was reported as a 1.6% annualized decline, and the Q2 report was released late this week at a reported 0.9% decline. This quarter’s decline was larger than the Dow Jones’ estimated 0.3% decline.

The consecutive declines to GDP have been due to supply chain disruptions, inventory declines, residential and non-residential investment changes, and overall government spending. The long-standing view for what constitutes as a recession has been three consecutive negative GDP readings, and any official declaration of a recession or expansions come from the National Bureau of Economic Research. Economists have expressed differing opinions on where the U.S. economy is heading. Moody’s Analytics chief economist, Mark Zandi, expressed that “we’re not in recession, but it’s clear the economy’s growth is slowing.
The economy is close to stall speed, moving forward but barely.”

Also, Wells Fargo produced an international economic outlook mid-year report, where the bank’s economists forecast a global GDP growth of 1.7% in 2023. Their outlook is rather pessimistic and forecasts a downturn for the U.S., likely a recession both domestically and globally. In addition, the bank expresses belief that the federal funds rate could reach 4.5% by 2023.

In summary, the only indicator that is seen as positive for the United States has been the jobs growth. The U.S. remains near full employment; however, a recession could drastically impact growth and lead to layoffs across the nation. The economy is spiraling downward, and the Fed continues to tighten the belt, with an anticipation of further tightening of monetary policy.