The past week has been one of the busiest economic reporting weeks of the year. Since the pandemic hit the shores of the U.S., the economy has been in a up and down whirlwind. Post March-2020, the American economy felt hardship across just about every sector: jobs, housing costs, food, energy, and other parts of the supply chains. Pandemic relief funding and efforts to prevent an economic collapse required an all-hands-on deck approach from the federal government.

Fast forward two years later, and the U.S. economy is still in a recovery mode. To highlight where the economy stands, the BGR team is highlighting three key indicators: interest rates, inflation, and the jobs report.

The biggest economic factor on top of everyone’s mind is the 8.5% inflation rate. The key takeaway from this week is that the federal government is focused on driving this number down. Key factors attributed to rising inflation remain food and energy prices, as well as continued disruptions to the supply chain and the increased demand for goods. However, there are good signs as to the jobs report, especially as April wages and salaries were reported to increase 0.9%, slightly lower than a month before at a reported 1.2%. Also, hourly wages in April were reported to increase 0.3%, and 5.5% year-over-year.  The positive sign: the U.S. has seen a few positive jobs report this year. The negative sign: inflation may still be peaking, causing Americans to continue paying more for goods.

One of the key actions during the early stages of the pandemic was taken by the Federal Reserve (Fed). The early days of the virus seeming to be an emerging threat came about in March of 2020, and to match the effects to American households, the Federal Reserve cut the federal funds rate by 1.5%. The federal funds rate is the rate banks pay to borrow from one another overnight. This decision by the Fed took the borrowing rate down to near zero, at the range of 0-0.25%. Additionally, the Fed is making moves to reduce its balance sheet up to $47.5 billion per month until August and $95 billion afterwards via not replacing bonds that mature. The last time the Fed shrunk its balance sheet: the Great Recession. This is a clear indicator that interest rates will not be the only action the Fed takes the rest of this year, which will lead to a lot of market activity.

The action to lower the cost of borrowing came back into question earlier this year, especially as Federal Reserve Chairman Jerome Powell’s first term was coming to an end. Ultimately, he was re-nominated by President Biden and awaits a confirmation vote on the Senate floor. However, he is still able to serve as the Chair Pro Tempore and continues to lead the Board of Governors. Part of his duties the last several weeks have included setting expectations for how the Fed intends to adjust the borrowing rates.

A few weeks ago, the Fed raised rates 25 basis points, increasing the federal funds rate to 0.25-0.50%. However, many stakeholders in the financial services space expressed that this action was not enough and that the Fed needed to act more aggressively. This made this week’s Fed meeting a must watch, with an anticipation that the Fed would increase rates 50 basis points and leave the door open to higher rate hikes during the next five meetings. The expected range of the federal funds rates is anticipated to be around 2.75-3% by the end of the year.

The Fed did in fact raise rates 50 basis points, increasing the range to 0.75-1.00%, but the key highlight of the week was that Chairman Powell stated the Fed is not looking at increasing rates above 50 basis points in future meetings. This came as a surprise, which led to volatility in the stock market the last several days. There was an immediate impact in market activity on Tuesday and Wednesday, as the S&P 500 had the single best day since May 2020. Then the market saw a correction on Thursday and Friday, as the S&P 500 fell nearly 3.6%, marking the second worst day of the year for the S&P. On Friday morning, the Dow Jones opened down 3.1% and the Nasdaq fell 5%.

Why? There are two key indicators our team is tracking for both the Fed’s actions and why the markets were so volatile. The jobs report and the interest rate increase.

The Fed actions to increase the federal feds rate was specifically targeted to address rising inflation numbers. The U.S. is currently some of the worst inflationary pressures in over 40 years. The current rate is at 8.5% and may not have hit the peak. To combat these rising inflation rates, the government has two solutions: either the federal government use wage and price controls; or employ a contractionary monetary policy to reduce money supply. What that means is that the United States must get Americans back to work, and for the Federal Reserve must tighten the monetary supply.

The Fed has shown signs of clear action to tighten monetary supply, with the rate hikes. On the other hand, the United States has seen relatively positive jobs reports in the last 12-months, with the best report coming about in February 2022. As of Friday morning, the April jobs report showed another positive number with the economy adding roughly 428,000 new jobs. The unemployment rate remains around 3.6%, which indicates near a full employment rate. However, it is important to track this report against the labor force participation rate, which declined in April to 62.2%. This was unexpected and is a big challenge for the U.S. economy, as many participants retired early due to the pandemic that has left many jobs vacant. 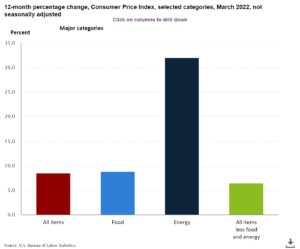 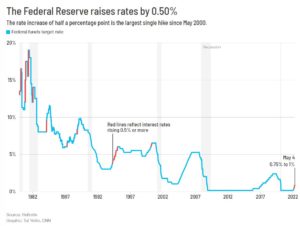