December 2, 2020 – BGR Group, one of Washington, D.C.’s premier bipartisan lobbying and public relations firms, today announced that The Honorable Stephen K. Benjamin, Mayor of Columbia, South Carolina, will join its Advisory Board later this month. Mayor Benjamin will focus on outreach to state and local governments and coalition building around issues including infrastructure, telecommunications, and public financing. In this role, he will serve as a non-lobbying strategic advisor to BGR and its clients as they navigate the current political landscape around local, state and federal government. 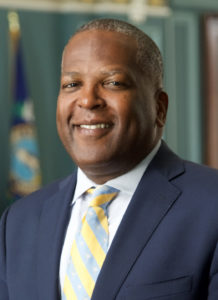 Benjamin was first elected mayor of Columbia in 2010. He served as President of the U.S. Conference of Mayors from 2018-2019 and as President of the African American Mayors Association from 2015-2016 He has also been Executive Chairman of Municipal Bonds for America, a member of the Federal Communications Commission’s Intergovernmental Advisory Committee, and a member of the Accelerator for America Advisory Council. As mayor, Benjamin has focused on economic development, job creation and maintaining a just, diverse, and trusted law enforcement department in Columbia.

“I am honored to be joining the outstanding bipartisan team at BGR,” Mayor Benjamin said. “Mayors serve as a crucial connector for localities and state and federal officials. I view this new role as a chance to share my experience as a local and national leader with communities across the country. I thank BGR for the opportunity and look forward to getting to work.”

“Mayor Benjamin will be a tremendous asset to BGR’s clients,” said Jonathan Mantz, Co-Head of BGR’s Commerce, Infrastructure & Energy Practice and the leader of the firm’s Democratic outreach. “We are thrilled to have him on our Advisory Board.”

“We welcome Mayor Benjamin to the BGR Advisory Board,” said Bob Wood, CEO of BGR Group. “Mayor Benjamin’s record of accomplishment and collaboration is well known. We are excited and proud to have him on our team.”

Prior to his service as mayor, Benjamin served in South Carolina Governor Jim Hodges’ cabinet as the Chief Executive of the state’s second largest law enforcement agency, the Department of Probation, Parole and Pardon Services. He also served as special counsel at a national law firm, serving as co-bond counsel on the issuance of over $150 million in municipal debt. Benjamin has been a member of the Federal Home Loan Bank of Atlanta Affordable Housing Advisory Council, Co-Chair of the Sierra Club’s Mayors for 100% Clean Energy. He was awarded the U.S. Small Business Administration’s 2017 Phoenix Award for Outstanding Contributions to Disaster Recovery by a Public Official for his leadership during an October 2015 flood.

Benjamin began his public service career in Columbia as student body president of the University of South Carolina and later as Student Bar Association President at the USC School of Law. He and his wife, the Honorable DeAndrea Gist Benjamin, Chief Administrative Judge General Sessions for South Carolina’s Fifth Judicial Circuit, are the proud parents of two daughters.